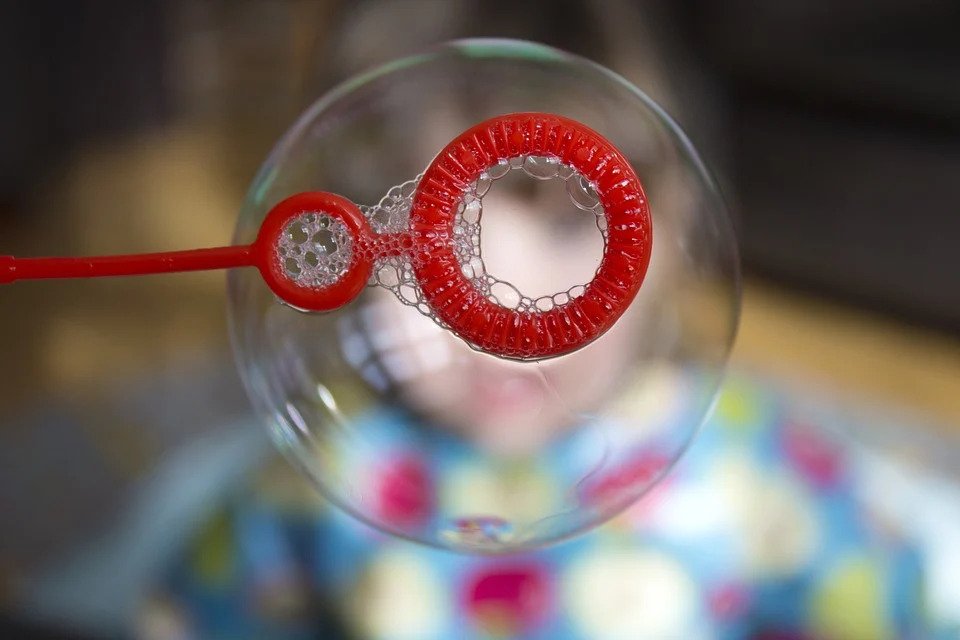 Is Canada on The Brink of a Housing Crisis? In the last decade, house prices in Canada have skyrocketed in value, meaning home ownership is nowhere near attainable by a large majority of the residents of Canada, especially in Vancouver and Toronto.

Due to the large increases in value, one would conclude that the housing market in Canada is in a bubble and that it is only a matter of time before it bursts.

But is this true?

In this article we discuss a few points which could be contributing to a housing bubble and market crash in Canada.

Before we investigate the various reasons as to why there is the possibility of a housing market crash in Canada, we’ll highlight how monumental price increases have been.

On average, house prices in Canada have experienced an annual growth, negating the financial crash of 2008.

As can be seen in the figure below, the average property in Canada will set you back around $500,000, however this is the national average – Toronto and Vancouver have astronomical house prices; A small 1-2 bed condo costs around $800,000 on average in Vancouver, rising to the multiple $millions. In Toronto, even the less-desired properties are averaging over $1m.

Vancouver and Toronto are the least affordable areas to live in the whole of North America – the price to earnings ratio in these cities are the highest in North America. 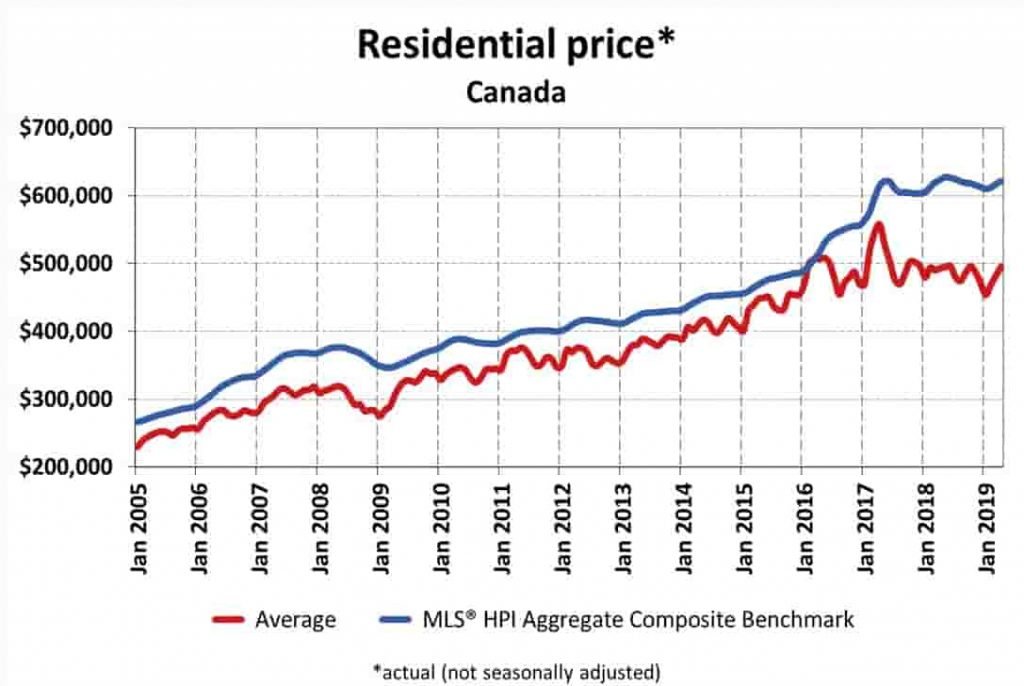 Rising prices are causing difficulty for young generations to purchase real estate in the major cities and surrounding areas as wages and inflation have not kept up with real estate prices.

However, it is not only the younger generations who are struggling with the current market; recent increases in Canadian mortgage rates have in turn increased monthly repayments for many residents, which is further squeezing the already struggling working families.

Price Comparison to The 1970s

As an example to showcase the difficulty many are having in starting out on the property ladder, or simply keeping up with mortgage repayments, take a look at the comparison of current times to the 1970s below:

2019: The median Canadian income is around $59,000 and the average house price is around $475,000. From the figure below, you can see that there is a significant difference; current average wages are around 12% of property values. 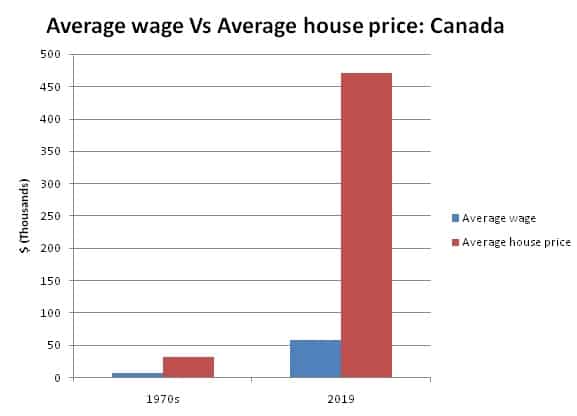 What Has Caused Such a Large Price Increase?

There are a number of reasons which have contributed to extreme price increases in Canada.

Low interest rates have been accompanied by heavy foreign investment along with extremely high overvaluations.

Check out our article on investment fundamentals to further understand price drivers within the real estate market.

It seems inevitable that there will be some sort of price correction – real estate markets are cyclical: Price corrections are inevitable, especially after periods of extreme growth.

However, it should be noted, that in general, even after a crash or correction, the market will continue to rise, due to various factors such as an increasing population and thus demand for residences.

To greater understand whether there will be a crash/price correction, we can analyze previous markets prior to collapse/correction.

In the figure below, we can see the typical cycle of the property market.

Prices will steadily increase, until a point where there is a rapid price correction: The market won’t necessarily fall into a recession as shown in the figure – the market will usually experience a price correction which will fall to a mean, which we have marked as the red line. 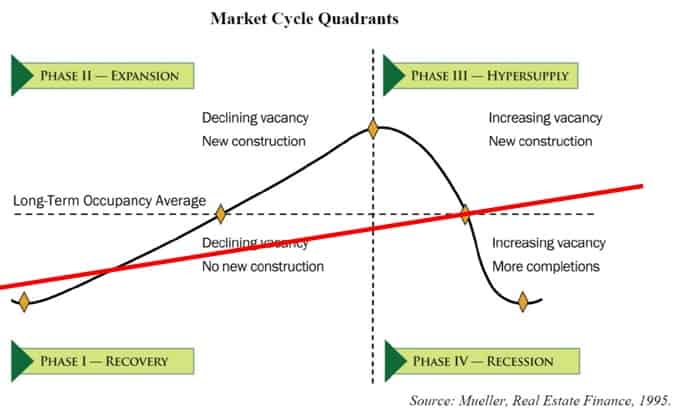 Comparison to The US Housing Market Price Correction

If we compare the current situation in Canada to that of the US housing bubble, it becomes evident that there is a high possibility of a price correction in the near future.

This can be seen in the figure below: The current price to rent ratio is currently at a peak in Canada, similar to the trend which was exhibited prior to the US housing market crash. 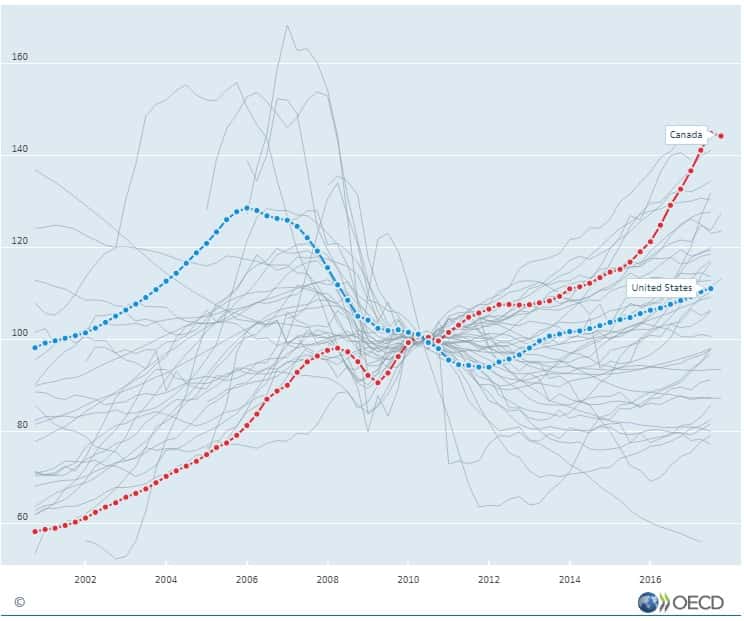 As noted above, there are various factors which were present prior to the US housing market correction, which are also visible in today’s market.

Benefits of a Market Crash in Canada

A poll has suggested that around 2/3rds of Canada want a housing market crash; as home ownership is near impossible for a vast majority of the population.

The main advantage of a real estate market price correction would be that home ownership is much more attainable for those who are currently struggling to find a mortgage deposit. 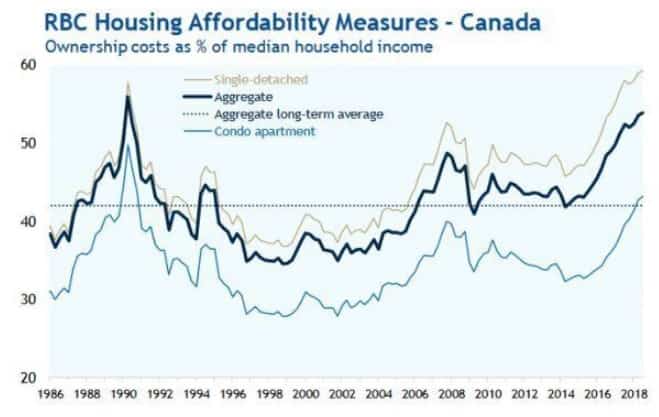 What Are My Options?

While a housing crisis sounds like an extremely negative phrase, it doesn’t have to be. There are opportunities which are found in market bounces. However, you may be thinking whether you should buy, sell or hold.

We wouldn’t completely advise against purchasing in the current market: If you find a cheap listing that is too good to pass on, then by all means take it.

Further to this, if you are set on purchasing a multi-million $ residence, then ensure that you will be able to keep up with repayments if they were to peak under a market collapse.

However, since current prices are overly-inflated, as a price correction is inevitable, it would be advisable to hold off until prices are reduced to an acceptable value.

If you have owned your home for numerous years, you may be apprehensive to sell up. While selling shouldn’t be your first option, it could be a means to generate a substantial amount of profit in a peaking market, after all, it is currently a seller’s market.

If you aren’t keen on buying or selling up, similar to above, ensure your property is not too highly-geared and that you are able to keep up with mortgage repayments – A price correction could also leave you in negative equity.

There have been numerous taxes and laws applied to the real estate market in Canada in order to slow the growth, with a few of these consisting of:

While there may not be a complete market crash similar to that in 2008, it does seem likely that the Canadian real estate market is in an over-valued bubble and will inevitably burst, leading to a price correction of up to 40%. However it should be noted, a 40% decrease is a worst case scenario.

Various sources believe that increased mortgage stress tests and increased rates have been set in order to cause a market collapse.

While these measures may slightly contribute to a correction in prices, their main objective is to protect home-owners and banks – if you are unable to pass a mortgage stress test, you’d be unable to make repayments during a market collapse, so the country as a whole is safer and better off.

Further to above, lenders are much more apprehensive to lend against risky properties and bad credit ratings in today’s real estate markets.

For this reason, at EMC2 Property, we do not believe there will be a complete real estate market crash in Canada, but rather a small price correction – as is common in many other real estate markets across the globe.

What are your thoughts on the Canadian real estate bubble? Let us know by tagging us on social media using the buttons at the bottom of this page.